I got a text around lunch time from 6K5ZLH saying he was going to be up on HL/GB-041 금오산 around three-ish. Not wanting to miss the chaser points, which from his neck of the woods are difficult to come by if I’m not also high up somewhere. So, I decided on going to HL/JB-140 천호산 where I’d previously activated from back in September. It’s not such a haul up to the top, it’s close by and it qualifies for winter bonus points.

As you can see from the trail on the right, I have to get through a small pass to get to any of the more convenient trail heads. Funnily enough, as I was putting on the chains to go through, a hiker was coming down my way and informed me it was basically impassible. I tried to get as close as possible–there were tire tracks, but I could only make it so far. Thus I parked at the tunnel construction site and walked the rest of the way up from there. This time I took a different trail up, then descending down the other trail I took previously. 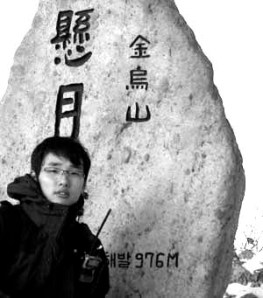 On to the meat: I was primarily trying to have a S2S QSO with 6K5ZLH on his Geumosan activation. It didn’t work–evidently he could hear me but not I him. I was calling with 50 watts and a yagi, he 5 watts and nothing directional or terribly gain-worthy for an antenna…

Alas, I had to move on and get some other contacts. I had some nice DX up into Chungnam making the first contact of the year on DS3LHL’s list and Gyeonggi (Suwon gave me two responses) with also some local contacts. I managed to finish up and break down before sunset, though when I did arrive at the car, it was fully dark. Today I made a better showing than yesterday, though 😉