This date was exclusively reserved to do an activation on HL/SL-001 Dobongsan with the 청룡 Scout group 6K0FA. They had been introduced to SOTA the week before after the hamfest at Yonsei University and were intending on doing a hands-on activation immediately the week after (today). Unfortunately there was a curtain of rain everywhere north of Chungnam with a full day of sunshine Pyeongtaek and southwards. That resulted in scratching that little activity off the calendar.

It’s about time I’ve returned to this summit, especially now that I have a better clue about how to go about it than last time! Also, it was actually possible to do this one up and down only in the morning, as both Ji-hun and I had to be back in town for lunchtime.

So, on this 17 of July, we made sure to be there not too much after sunrise, park in an actual parking lot that the village has (completely missed that last time), monumented. Since we parked down there, we had a chance to walk through the village to get up to the main trail head, passing by many of the scenes you see below.

It appears that the village has either a bustling artist community, got some money, or was the subject of some art college’s experimentation. Anyway that you might look at it, it certainly makes for an interesting stroll and is quite well done, in a multitude of media.

Whilst the signage throughout the village clearly indicates how to get up to Barangsan (non-SOTA, but on the way to HL/CN-012 월성봉), once you get on the actual trail the situation is severely lacking. Now, when I visited this very place last year, it was in the exact same condition. Naively I must’ve thought it to be a work in progress, evidently it’s still in progress? Still got those nice extruded aluminum sign posts inserted into ground but no actual signs affixed to them to indicate which way to go about ascending on the less than clear trails.

Hmpf. Not impressed. Especially given the proximity to Daedunsan Provincial Park, to which the trails going over Weolseongbong actually serve as one of the many options to get up to Daedunsan. It isn’t like you’ll get lost, but it certainly isn’t convenient to have to try multiple trails when you don’t know…

Like last time, I did a pseudo-loop, ascending via the same route but intending to descend via the pass but turning off earlier when we saw a suitable trail with others coming up from our destination (where upon arrival we saw a bus!).

We didn’t see any human life on the way up the hill, but plenty of arachnids as well as a couple of deer. There was also a patch of mosquitoes that we had to make our way through (when we were not on the ridge, thus no fresh breeze to keep them away).

For the short time available to activate I made a pretty good number of QRP contacts, not only in the 3 call area around Daejeon but also as far south as Gwangju and to the Buan club out activating Wido Island (I should’ve been there before they rescheduled)…

Equipment for the activation was the FT-857, 5단GP, and LiPO battery (wasn’t planning on being up there for that long, anyways). Next time I’d like to make a point to hit HL/CN-002 대둔산 마천대 from that angle, would be nice to take a new path, and maybe see those mountain goats again.

June 16, 2011. Just your average Thursday morning, to go out to your average neighborhood one-pointer that you’ve activated already, like, twenty times this year. In this case, it’s our local “patron mountain,” HL/JB-168 Mireuksan.

So you wake up around 4 AM or so which is normal because your average cat wants to be fed at that time. Or any other time that it wants, for that matter.

The objective, however, on this particular morning is not to feed the cats, but to witness the rising of an almost fully eclipsed moon and observe as it exits the eclipse during the following hours.

As Murphy dictates, it is cloudy outside. Oh, well, maybe it’ll clear up later.

You don’t hear owls in town. In fact, I didn’t know there were any owls in the neighborhood here–the only other time I’ve heard them is around HL/JB-104 고덕산 just to the south of 전주. Heard them as well as some other hooting beast–though it’s too early for the quail to be out, just yet.

About twenty/thirty minutes into the hike there were other hikers on the trail, not many yet at that hour. It’s early enough that I might go for some HF, even though band conditions haven’t been the best lately.

Get some good European contacts on 20m & 17m, good signals coming out of England, Germany, Portugal and Italy, but the German station couldn’t hear me (above the megawatt Japan stations he was busy working).

As time moves along and HF dries up I move up to VHF, but not before hearing my name…

It’s not even seven o’clock yet and Jerry sees me as he’s coming up the summit on one of his thrice-weekly fitness outings to Mireuksan. What a pleasant surprise!

Though, he’s off as quickly as he came, he does have to go to work, after all. I, too. Just a wee bit later. The kicker is that he’s in my first class of the day!

Alas, after working the locals and non alike, one last bit of HF and I also, am off. The clouds didn’t clear in time, and by now the eclipse is officially over. At the very least, I got some good radio play and DX in a no-stress fashion. On a work day, at that!

Yep, we’re in full-on preparation mode for Thanksgiving here, yet I managed to get out during the period where I wasn’t assigned any “shifts” 😉 as we’re doing the gig on Sunday (as opposed to Thursday, when we were in class).

Originally, we had tagged this one as a no-name, with an estimated elevation of 680m, however, after actually going out there, and researching beforehand this place has the appelation 서래봉 and an elevation of 700m or 703m, depending on who you ask. As a matter of fact, at the summit, there are two markers, one stating each elevation. Letting the GPSr settle on the ground for a good 20 minutes told me 703m. Also, the name isn’t the clearest, as a ways to the south at Naejangsan, is another Seoraebong, and during QSO I had to explain that I was at one and not the other when questioned why I was saying I was in Wanju-gun…

Getting out to the trailhead is a simple enough affair, going out to Bongdong, passing the Hite Beer factory, then heading up one of the numerous Tal towards Odo Pass, passing an O’s Gallery along the way (expensive coffee! extremely nice place & atmosphere). No time to stop today.

Shortly after, you’ll come across a fork in the road, take the right, and find a pullover to park (access may or may not be restricted–there are chain barriers at certain points, and is an access road for dam construction in this valley). It is at 35.90747°N & 127.23684°E.

After walking along this gravelled road 600m to 35.91184° N & 127.23430°E you’ll find the map sign (below) and actual trailhead. Note, there are a few different paths and aspects of approach, as well as other peaks and sights to see (including a mountain fortress on the south side of 되실산). It is here where the real path starts, but it’s clear where to go and well marked.

Now, to start off this activation, I had a tiny panic episode: I had wrapped up the LiPo battery in my change of clothes for on the summit A) to keep it warm, reducing the cold’s impact on its performance and B) as padding. Brilliant me in quickly unrolling my dry t-shirt watched as the battery gently rolled out of the shirt, thinking “nah, it’ll stop in a foot.” It didn’t. At first slowly, then ever so quickly did I observe its rapid acceleration as it headed down the summit (I was camped on the slope out of the wind), its bounces becoming ever more spaced as its speed increased, with nothing jumping in its way to stop it. Roughly 50 to 60m downhill it wedged itself between a rock and the ground…I wasn’t too happy about this by the time I made it down to fetch the battery, but things could be worse.

OK, I made it back up, set up the setup, and started piddling around, at first on 18MHz (dead), then 14MHz (not so dead, but not responsive), and finally 7MHz (very alive, but still not responsive). Couldn’t get any replies to CQing, and my answers to others weren’t heard (hearing a few Chinese stations, the usual many Japanese stations, and oddly enough, quite a few Korean stations!

First QSO to 것대산 with 6K0MF who I heard CQing while I was scanning 40m, so I decided to answer. It was our first QSO of the day for the both of us, with decent signal for the distance. Next up were two locals, OYX and RDY. However, that fourth contact was a bit elusive: the person later engaged in a QSO with OYX couldn’t hear me (could hear him well)–he was closer to me and in the shadows of the immediate mountains. Nobody heard my CQs and my HT battery was starting to run dry.

I already had one rain squall during the activation, and I could see another coming (plus the XYL had texted that there was thunder at the home QTH–in November! ugh…), so I needed to wrap this up quickly. I hooked up the buddistick’s whip with no coil and started adjusting for SWR on 2m, finding an acceptable match (it always is shorter than it seems it should be!). Called first at 20W–no takers. Upped it to 50W–aha! DS4GOC down in Gwanju–long time, no see, not since the fourth of July activation when I was down in Gwangju! What a lifesaver. Well, we had a quick QSO, then I packed up as the rain picked up–about 40m down the summit, I heard the clap of thunder not so far off…most of the descent was with heavy rain, most of it horizontal, except for the final 150m of descent. It’s nothing that couldn’t have been waited out, but it was getting a bit chilly.

All in all, just barely successful, and a pleasant ascent, none the less. I’ll be back in the area again. 73~ 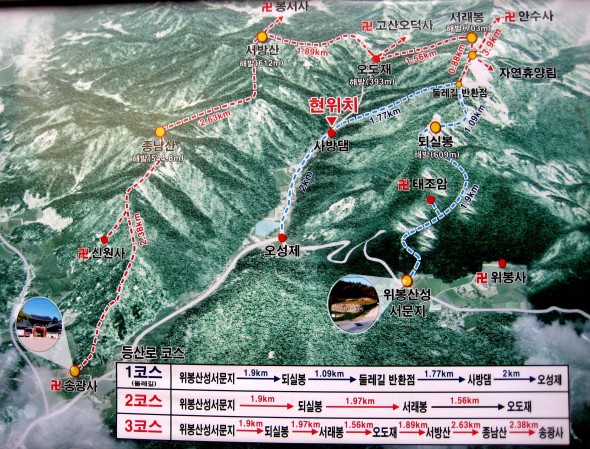 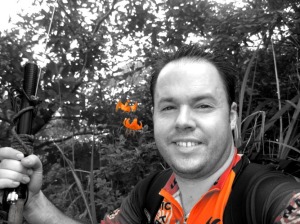 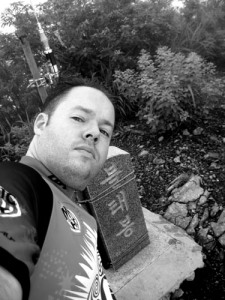