Out with the old, in with the cold!

Yesterday, December 1, definitely truly proved itself to be the beginning of the winter bonus period in Korea, with a good snowing…even with some starting to stick! Might have to put the wheels away for the winter? Even yesterday’s tea, which had been left behind in the car, had frozen–the change from a very comfortable autumn to “it’s officially winter” was a rather sudden one! What better way to commemorate than with an after-school activation on one of Iksan’s higher peaks, HL/JB-140 Cheonhosan? Registering at exactly 500mASL it just squeaks its way into 2 points and winter bonus territory. Time to cash in, while the daylight lasts~

So, class was finishing up in Nangsan, at the northern end of Iksan, so I could easily cruise on over to Yeosan, up the hill and over the pass that is often snowed out so much that you have to park on one side and walk up the road through the brand-new two-lane tunnel which passes under the pass, and up a bit closer to the ridge line on the northern side of the hill.

Despite the frequent snows these last few days, it was actually possible to get up to about 300m with the car on the logging roads–even the parts that were in the shade.

To ensure that I wouldn’t be calling CQ for two hours on this hill on a weekday, I made sure to bring the trusty ol’ 5 segment collinear–despite not having toughened it up for regular use, it’s still holding on. Whether it remains in its original tuned condition is another issue–one I haven’t delved into recently…if I don’t measure it, it doesn’t exist, right?

So, the activation was actually quite quick in the doing, and hands weren’t cold except when collapsing the antenna mast (gloves just don’t grip as well!)–thrice: once for taking some arial photos of the summit, once for resetting the antenna (love it when calling back after your first CQ that the antenna just comes crashing down) and finally to pack up and descend.

Well, at least I was back at the vehicle, with daylight to spare! Not an easy feat, after school in the winter! 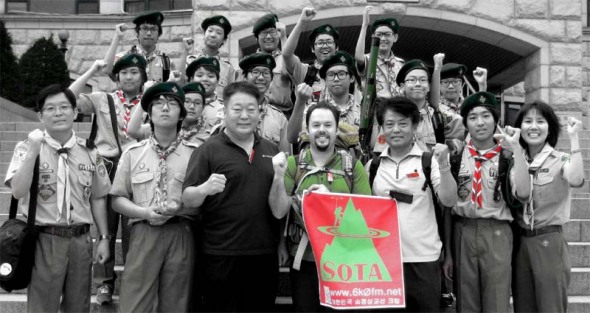 Additionally, after this month’s market (July 10, 2011) was a SOTA presentation at the university, which HL1FB so graciously helped to get a room with projector for hosting the event and showing a power point presentation about the program.

Not only was that going on, but also since the main audience was the 6K0FA 청룡 Scout Troop, we planned a hands-on activity with HL1WOU (and DS2NED to help out) to make portable slim-jim antennas with the students for the 2-meter band which they could take home and use on their own hikes when operating portable. 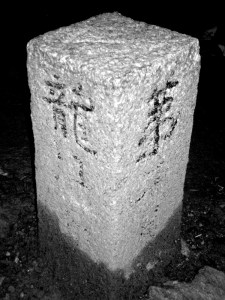 After the antenna activity was complete, the scouts had another engagement to move on to, so I decided to head up the hill behind the University, HL/SL-008 Ansan, for a quick activation before what looked to be rain later in the evening.

It’s a nice short hill, one of the lower summits in the Seoul area, in what amounts to a city park for many who live on its peripheries. I went via one of the back access roads of the university to later descend on the opposite side by the metro station.

When I got up to the top, with a large stone tower and a few people hanging out, I thought it better not to set up the good antenna with all the dark clouds about, so I HT‘ed it so I could get out quickly when it did start.

Even more fun is that 6K2HVZ contact I had–was actually one of the scouts that had been in the group this afternoon!

Good thing I didn’t set up everything, as when I was finishing up my fourth contact, the umbrella came out! Eh, activation complete–hopefully next time it’ll be nicer out for longer. Back to the bus station it was, get a ticket and some goat cheese. Don’t see much goat cheese down in Jeolla, but we do see some goats sometimes….