I had gotten some news from Peter DK4YO about some fox hunting happening somewhere “down south.” This being something I’ve heard about many times, the stars hadn’t aligned until now for me to give ARDF a try.

It happened to be that the 거제도 지부, the Geoje Island KARL branch was hosting the March competition at the northern end of the island, where HL/GN-292 大峰山 is located.

So, after a few last minute phone calls around I hooked up with HL4GWB and I joined his carpool leaving Jeonju the next morning at 5 am. Three hours on the road having passed we stopped when we got on the island for a breakfast of 잔치국밥, which basically resembled a 육개장.

Just as we were finishing our meals up, a bus with a load of Seoulites also going to the competition pulled up for breakfast. Among their ranks was HL1OLA who I had a QSO with just a few weeks before from Bulamsan!

Upon arrival, we signed in and got our jerseys for the race. I got a quick crash course in ARDF before we were bussed off to the other side of the mountain where the start point was.

My group’s start time was at 11 o’clock, so as everybody was waiting around someone started whacking a volleyball about, which provided good warm up. In the middle of all this, DS3MBB & OCO pull up–I guess they had taken a wrong turn somewhere along the way down from Daejeon.

Off we went–getting off into the course, then splitting up after a few hundred meters. Some competitors had to seek out certain foxes of the five, me, I could go for any three that I could find since it was my first time. My main goal was to get out there and see what was beeping. At first I started following five but then saw that fox #1 was much stronger. In quick time I found fox #1 (as well as many others, from the group let loose behind me five minutes after ;( heheh!

At that point, it wasn’t possible to continue, so we had to backtrack a few hundred meters then I chose to go up the ridge, towards the summit. Going towards five I got distracted and took a tour of the summit of HL/GN-292. I descended again and got back to business, finding #5 quite a ways off farther than I expected. 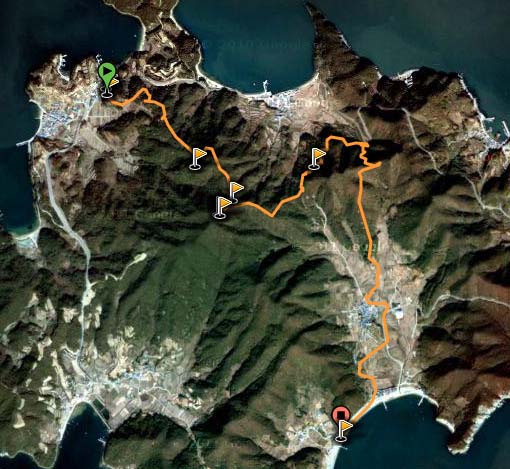 Then comes the part that ate no less than 50% of my alloted time: going for beacon #4 which seemed to be close by, I went eastward in its direction. Coming to one of the main roads, I decided to head up to a pass where there should have been a trail (according to the map, and GPS as well). Well, there should’ve been a trail up to the pass, also, but I ended up engaged in a good 20 minute scramble to get up there to find a small track, and my nice strong signal for number 4 much diminished.

However, number 2 popped up on the radar quite strongly…more importantly it was on the way to the finish which is important as even if you get your three foxes if you’re over time you get disqualified. I started booking that way with only forty minutes remaining. At the bottom of the hill the fox still hadn’t turned up yet, ran into DS3OCO and continued (he wasn’t as pressed as I). I got extremely close to #2 but with less than ten minutes remaining and a rocky beach to run along couldn’t waste any time.

I managed to get to the finish line with about five minutes to spare and only two foxes found, despite all this I still finished first among the first timers participating that day.

Fivesome upon Five Peaks on the fifth

Literally “Five Peaks Mountain,” was our destination on Saturday for this joint activation. HL4GKR made the summit selection a few weeks back and we were accompanied by HL4GHT as well as HL4/DK4YO and his XYL to HL/JB-139. GKR was already familiar with the area around this specific mountain, and was actually activating last month on the fifth from here, giving us both S2S chaser points between the two.

This peak falls right into the bottom of the two point bracket with a little over 510 meters in height. There literally are five different peaks, each accessible along the trail which runs down the Honam range. Due to this, there was actually a fair amount of traffic coming through. At the bottom we passed two tour coaches and on our way back down another one.

We took the most direct route up to the highest peak not passing by the others, which was about 3km long each way. With the exception of a few icy patches on north facing slopes the trail was in good condition after last weekend’s rains and the dry week following.

The first contact of the day was between HL4GKR on his HT and DS4OVT over in Gimje. We then started to set up the antennas (two: I brought both the 6 element yagi for VHF as well as the Buddistick for HF so we could have multiple OPs on at the same time) and boil the water for the ramen.

After eating lunch we were immediately on the air, GKR on 2m and I on 20m, me making the first four contacts in quick order (there was a contest going on) all from Japan, which is rather odd as I normally don’t hear Japanese stations on 20. I then gave up my post for others to play HF–many stations were heard, Colorado, Guam, Philippines, Australia and China, amongst others.

In the meantime, the others were chilling out on the summit in the warm sun and light breeze–the weather was better and warmer than down in the valley. GHT did a little bit of operating on 2m as well but didn’t activate.

After 3 hours on the summit and a couple of hours of operation at full power the batteries weren’t dead but we were thinking of descending before we were. I brought up a brand new 12Ah SLAB which supplied a good lot of time running HF at 100W.

At 3:30 we started heading down to find another bus load of people in the parking lot where we started: with three or four tables set up drinking makeoli and eating pork and raw manta ray. We were invited over for a cup and a bite to discover a bunch of them were also over here from Iksan, one guy even from Yeong Deung-dong. Actually, on the way up we met many Iksanites on the trail.

To conclude, everybody made it up and down, two of us activated and everybody had a pleasant time. We all piled into the car and headed back to Jeonju where we split off. There is talk of a summertime overnight activation in the air, though….