The official first day of vacation is never meant to be relaxing or vacation-like, etc…most of the time it’s spent catching up, be it on sleep or administrative duties (hitting the bank, renewing leases, emptying the litter box, etc) or gleaning contacts on deserted, windswept mountain tops. Today was a day to make it count, like Tuesday, when the formerly closed trails have finally been reopened, well, today was my chance to pay a visit to both HL/JB-017 Unjangsan and HL/JB-020 Gomjigisan. Uh-huh. Another double activation (8+3)+(8+3) and one that I haven’t done since 2012. I’ve been waiting…

When I went down to the car at four o’clock, I wasn’t too concerned–yes, it’d be chilly (chillier, with that nice, sparkling, clear sky) but it is almost technically winter. Isn’t that what it’s been like these days? Having arrived at the trailhead located at Naecheo Village (not at Piam Pass, this time), a local bus arrived a few minutes later: quick jumped out to ask him about the schedule, as I’d like to do something more like a through hike at some point, JB-020 –> -017 –> 027 but getting back to the car would pose a slight challenge, unless I feel I’d be lucky in getting a call taxi to come out. The bus doesn’t go in my direction of interest, but could always be a possibility later on (or going east over Gubongsan…which will become a SOTA mountain with the next update!).

So, I finally get all organized, shoes and spikes on, just as it’s barely starting to get light out when I start up the trail–I’m leaving fresh prints, but that’s to be expected. All is fine and dandy, though as I ascend closer to the ridge (which runs on a north-south axis) I can hear the wind, which I think has actually started up because the sun has risen (energy input into the system). Reaching the junction on the ridge proves me right: yep, wind. No problem, winter, right? It would seem as if the drifts of the other day were a simple appetizer, just a smidgeon of the main course to come…

My main source of surprise comes from the fact that HL/JB-017 Unjangsan is a fairly popular mountain, receiving busloads (really!) of hikers coming to make the loop (which doesn’t get closed off during fire season these days) that culminates between Dongbong (Samjangbong), Unjangdae and Seobong (Chilseongdae). However, the trail did not seem very broken in, at all. Even to the point where I had to break trail in parallel, off to the side of the main path, because of the drifts. The drifts are in the areas sheltered by the wind (hence the snow gets deposited there) and was shallow, guess where? On the windy upslopes a few meters west of the ridge’s crest! We’s gots cold and numbness here in the ROK, but I haven’t thought of frostbite in years, possibly decades. In order to facilitate the ascent, I had to remain exposed to the wind–not fun. Then there are those stretches where you don’t really have the choice but to stay atop the ridge (nice drops on both sides) and face the drifts. Ah, the drifts. Did I mention there were snow drifts? There’s a first time for everything and this is the first time I’ve wished I had snowshoes in Korea: trying to advance, uphill, and breaking through chest-high banks of powder. Seriously? I don’t think there had been more than 15cm of actual snow that landed on the ground, but now it was all right here.

Irgendwie, finally arriving at the summit just a bit after nine, I didn’t wish to fool around and lose the heat I had been generating plowing up the hill (for what seemed ages, but around two hours for the ascent isn’t /that/ bad…it’s quoted at an hour for that trail, can take one and a half loaded down with gear, so I’ll take that given the conditions), so I quickly set up the antenna (5s collinear, as per our “nail-it theme” this month) and set up shack sweet shack in the bothy bag. The actual activation itself wasn’t very punishable, having been completed within a half an hour–quite smooth for a weekday morning.

Despite stunning views in all directions, today would not be a day to dilly-dally up in the activation zone, especially were I to stick to my original plan of activating two summits. I have to say that during the activation, my mind was leaning more and more towards not doing JB-020, but was open to checking it out as far as descending via Kalk Pass–however some of my antenna segments had gotten stuck in the tree while dismantling and sortof cemented the thought that a second activation would not be possible today. That, however, did not stop me from still taking that route (breaking trail should be easier going downhill, no?) plus it should be a bit more out of the wind…

바보…I should know better, as it isn’t all descent, but those places it wasn’t that bad, just a newly developed hole in the side of my shoes was beginning to make itself apparent breaking the banks. Then some uphill through the snow, then down again, until the pass…eh…Gomjigi? Nope, this bear was not going to be crossing that mountain today–I came down a better trail, I’m not going up that path. Down the access road it is!

Five minutes later I am thawed out enough that the thought crosses my mind “maybe I can do it today.” That’s a 400 meter elevation difference talking there–the weather hasn’t changed up there. Besides, my shoes were sloshing around, now that everything had melted. That wouldn’t be a good idea. Moving along, people. Going down this road with its many switchbacks is actually longer, but more comfortable. At one of the curves, I had the impulse to look up–what did I see? The very same ribbon I strung up three years ago marking the end of the shortcut between Naecheo Village and this road (because to follow this road all the way to the bottom, a bit to the east and then back up again to the main trail head and parking lot would add an additional 1.5 km or so). No joke!

Twenty minutes later and I was back down at the parking lot, still the only car there, so I assume the only client of the day for Unjangsan. Not before rustling up a doe just above the farms… 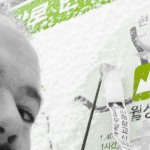 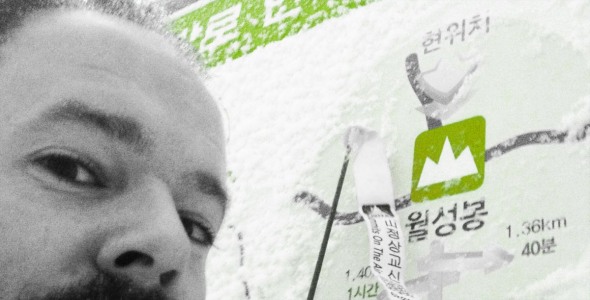 Day three of the new winter bonus period, Wednesday afternoon, northern edge of the province, last class at fifth period and more than a couple thousand unactivated summits in HL for 2014, I set off to the east to ascend HL/CN-012 Weolseongbong from the east, well, because everything from the west was closed (fire season until the 15th…). 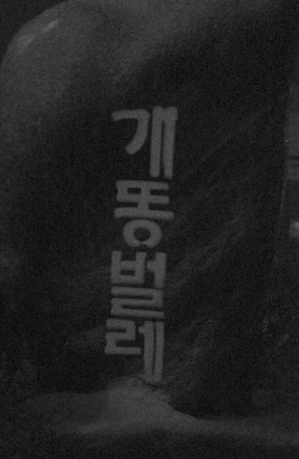 With the snow more or less steadily falling, and actually sticking quite well once crossing over the border into Chungcheonnam, I drove through Nonsan and to the north of Daedunsan Park, entering via Surak Valley (as far as Bogwangsa temple).  From the ridge trail starting at the public toilet outside the park gate, by a mini-traffic circle, next to an engraved stone steele citing “dog-shit bug,” hiking commenced around 16:00.  It’s actually a colloquial name for “firefly.”  Nothing indicating light with that terminology…must’ve lost the flaming bag in translation.

The bathroom was spiffy, not in that music started playing when you walked in, rather that the urinals were all waterless.  I’m not concretely sure if I’ve seen waterless in Korea yet…but it’s about time!  Note about the product name:  when you say “ssh” in Korean, it actually means to perform a number one, and not necessarily to be quiet.  Though, in the “why make simple things more complicated” department, I can see this of use in urban locations, but when you’ve got a slew of thirsty trees a stone’s throw away, especially during the dry/fire season, isn’t the choice of action obvious?  Serious overabundance of white snow this early in the winter season…^^

…at the same time, I didn’t see more than two sets of footprints heading up the hill (none descending).  Despite this trail primarily following the ridge, it starts off after crossing the creek along a small gorge, along the way was a pretty serious sink hole, approximately 10m deep, ribboned off.  Quite interesting–even more interesting would be to know where other sink holes are currently in formation!  A bit afterwards and the trail switchbacks a couple of times to leave the gorge to mount the ridge, from then on quite comfortable walking, technically more exposed, but actually the wind wasn’t bad at all there.

After a while, things do get steep,

before a trail junction and an opening up onto an azelea field, featuring a nice wooden gazebo and a huge boardwalk.  One of the drawbacks about heading out in the early snows is that the trail has yet to be packed down…raised boardwalks will have more snow (cooler than the ground) to shuffle around in and you’ll still be hitting the leaf layer on the ground, unavoidable since spikes are necessary (but so much easier!).

Being the first time I’ve approached the summit from this direction, I didn’t realize how close this clearing was to the summit–I had reached the junction at the summit (next to the helipad) within an hour of the start of the hike!  Nice!

Gear this time around included a single-band mobile rig and the good-ol’ 5 segment collinear antenna, with aim to not fail on this weekday activation, and to get back down in short order…in the end the activation lasted through sunset, and I descended a darker trail (still bright from the clouded moon).  In fact, the summit was in the cloud.  I would’ve activated from my normal spot to the south by the cliff, but there was much less wind on the northern edge of the helipad.

Eight contacts were effortlessly collected, which was a relief–some days it can take forever and a half just to get four!  Pack up, head down…both going up and down it was a nice and quiet, snowy hike, not very cold at all once moving, however it seemed as if the weather was worse at the trailhead, wind and snow-wise.

The drive back was definitely more strenuous than the hike!  Though, as if by magic, crossing back into Jeolla, the roads were simply wet instead of snowy, and the going was much quicker! 73!