Well, three of us were supposed to go for a walk to a “short mountain” today, XYL, Ing & I. Firstly, nobody was out of bed before ten this morning. Secondly, after breakfast, around about 12:30, the girls decide they want to go see a movie. Looking outside at the nice spring day (mid-60’s, sunny) I knew I wasn’t going to the theater. So, I could select something else a little longer or higher, though still keep my senses as I knew I wouldn’t get out of the door by one o’clock. I’d pack nice and “light” preparing for an HF-only activation with the HT as backup, and be able to cover more ground at a faster speed.

My thought, in this case, was to start at JB-192 Yonghwasan then cross over to JB-168 Mireuksan. To make this possible I would drop the bike off where I intended on ending up on the other side of Mireuksan, then park over at the bottom of Yonghwasan in the lot at the Geumma Tourist Spot. Envisioning covering new sections of trail, I drove off looking for the “G Course” to drop the bike off at–firstly, the nice areal photo map at the end of the C Course has the village name for the G Course spelled wrong. Then, no one who lives around this fabled path knows anything of such a path, sure, there are [a few] paths leading up from various points but as I’ll be coming from the other end, how am I to know on my first try.

After this much piddling around, I was just going to go straight to Yonghwasan (it was past two) and drop the bike off at the pass halfway. Based on my activation speed, this turned out to be a good decision. 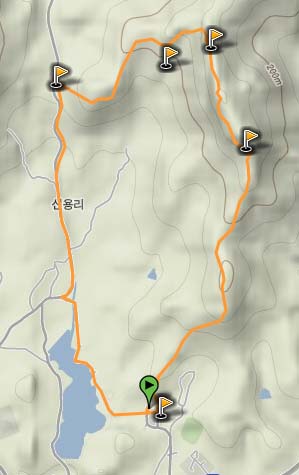 I started my climb from an extremely full parking lot at the Geumma Tourist Spot–full, as in people were parking down the middle of the lanes of the lot. I managed to find a spot off to the side, and left on foot at 2:30. After having reached the summit, I moved on to one of the “less populated” summits and set up my operating position at 3:30.

As I mentioned before, this was an HF-only activation and I started on 20 meters where the signals were quite strong, though many unintelligible Russians with no clear callsigns. They’ll be more intelligible next weekend for their DX contest, though 😉 However, one very readable station was T3ZAQ in Kiribati, he was working through the stations quite professionally and efficiently, and I got a good report from him though he had a tough time with the callsign at first. I overheard that the tsunami luckily didn’t give them much grief, rising only 25cm or so out there.

Almost immediately on an adjacent channel I heard another very clear station, heard VK4 somewhere in the call exchange, listened to jump in sometime but then they finished up and QSY’ed in their own directions, one the dinner table and the other somewhere unknown. Maybe about ten minutes later, I found that same voice farther up on the dial, wasn’t a VK call but a ZL call–I hung around then broke in, and was lucky enough to get this nice contact with such good band conditions after hanging around a bit more. Well, John ZL2JBR is based outside of Wellington, and it seems like the band was opening up early for him (he had had a contact to the UK beforehand).

I scanned 20m a little bit more, called CQ some, but didn’t turn up anything. Moving up to 17m, I heard our T3 station again, and looking around I caught SM1ALH as he was starting out on the air over on a Swedish island in the Baltic Sea (IOTA EU-020). He had a clear signal but couldn’t hear me that well, though he has 800W going into a beam! In the end, we did manage.

The last QSO of the day was with 9M2TO in Penang, as nice a local to be in as any. There was some severe QSB on his signal but he could hear me ok. Penang is IOTA AS-015

After packing up I tried to see if anyone was on 2m, but there weren’t any takers there. I headed down to where the bike was, not requiring lighting except on the last 800m of trail which was more heavily forested. Good news: the bike was still there (not like it’s a problem around here), I rode back down to the statue park with it’s [now empty] parking lot, packed up and headed out. JB-192 is finally activated this thirteenth of March, 2011!