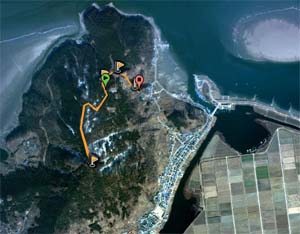 A Wednesday morning. No class. First day of June. Sounds like an opportune situation to get a head start on some good figures in the stats!

Technically, this should’ve been a double activation, first a quickie at HL/JB-199 계화산 then a quick scuttle over to HL/JB-196 석불산 not more than 4km away and just as short. However, the more that I try to operate in Buan or Gunsan, the more I’m starting to believe the Saemangeum might have an effect similar to the Bermuda Triangle…you’d think being way out in the open and away from everything there’d be nothing between me and those QSOs!

Well, I must’ve spent the first three hours of the activation draining my battery calling CQ on 20m, likewise on 40, a little bit on 17, and also on 2m. No love. The wind took down the buddistick twice, maybe, and keeping the big collinear up, well, let’s just say I was kept on my feet. Also, the tuning was knocked out as my phasing spacers were tugged this way and that.

Of course, when I was packing up the antennas and ready to bag the whole activation all together (not a single QSO!) I hear someone calling on the highway from across the summit where I was…quick-like get over there to answer!

There was then the rush of a half dozen contacts, running continuously (everybody on lunch break?), everybody asking if I had had lunch yet (nope, but was meaning to ASAP). In the end, the activation was saved, but I had nowhere near enough time to even consider heading over to Seokbulsan! It’ll be next time, then perhaps I can hit the filming studio they’ve got over there, too.