It was a foggy morning at a lone gas station…

Nope, it’s not the opening line to a scary story but the beginning of the day as we started out from Geumma to go down to HL/JB-087 Gyeonggaksan. Being the weekend with no classes lined up for the day and good propagation forecasts for 20m I prepared for an HF activation on this second visit to 경각산. I had briefly toyed with the idea of taking two cars since Ji-hun was coming along to do something different than a loop as this summit lies on the well established trail along the Honam Range, more A to B but rejected that in the end.

We started at Bul-jae Pass (310m) taking the trail I took last December up to the 660m summit operating from the stilted box out of the wind. My first priority was mounting the 20m buddistick vertical above the roofline of said box and arranging the counterpoise where it wouldn’t touch one of the many branches in the way. This was a delicate situation as the intermediary mounting on my broomstick had broken, being simply cast metal it was a bit brittle (not part of the buddipole kit–that’s strong plus it’s all machined and not cast).

Once I was up and running scanning 14MHz things looked pretty sparse, a couple of Russians, Chinese and an Indian calling CQ who faded out very quickly. Hmpf. I tried calling CQ at a few spots on the dial with no takers when I heard Chinese station BG2BLM calling CQ 1200km up north in the vicinity of Harbin. We had a nice QSO half in English half in Chinese and then I moved on to answer BH1JNE only to exchange calls but not complete the contact….

In the meantime, we saw many paragliders appearing about us, which for Gyeonggaksan is actually normal, elsewhere close to the summit is a prepared launch area popular with many. During the afternoon there were around fifteen or sixteen visible in the air, as you can see to the right (with HL/JB-048 Moaksan looming in the background). About half of the group was on 144.04, using a DS5 call which I only heard once the whole time and not completely. When calling no one responded. The others had radios also, but not on 2m…maybe FRS or something.

While looking around some more on 20m I heard a very clear voice in English, catching only the tail end of his CQ call–CCY. Quickly replying he came back but there was something up with my audio a bit though my signal was nice and strong, so I did manage a short contact with Bill ZS6CCY in South Africa–he had his antenna aimed long-path over South America towards Japan. 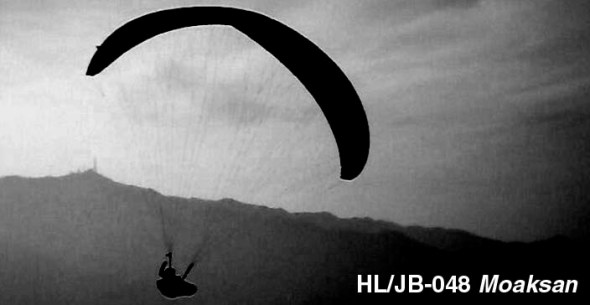 My last contact on 20m as the battery was dying was with JI1HAC in Chiba, a satellite city of Tokyo. Initially I started out with an unnecessarily high power of 100W with him, dropping to 50W then to 30W during our long QSO. Kindly he helped me with reports in correcting my audio “problem” where I hadn’t as of yet fiddled with the stock setting of 50 for the SSB mic gain on the FT-857, I lowered that to 30 greatly increasing readability.

With the LiPO off duty I swapped out antennas to the QBE‘s 2 section diamond whip for some 2m HT action with the VX-6. I proceeded to make three contacts locally ending with HL4GYT who ironically enough, appears to paraglide himself and frequents this very area. He informed me he was coming out the next day (Sunday) to Gyeonggaksan and would be on 144.240, his regular frequency for this activity. I’ll definitely see if I can hear him tomorrow!