The original plan for this weekend was 마니산 HL/IN-001 on Ganghwa Island AS-105 for RTTY, Russian DX and IOTA. However, logistics with the intended QTH for the HL9 amateurs fell through–something was up with the villa as it had been closed all winter and just opened up two days before we were to come in and so it was off at the last minute 😦 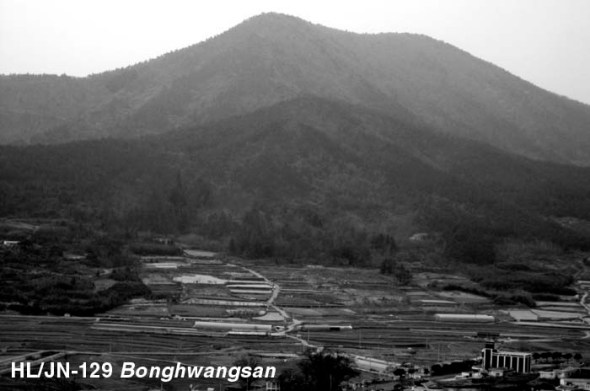 What this means is that the weekend was freed up. Instead of heading north, we decided to head south, to Yeosu. We picked up DS4GQZ on the way down, in Suncheon. He had recently expressed interest in SOTA, so saw this as a good opportunity to meet up for a joint activation.

Yeosu is surrounded by mountains and mountainous islands, so the hard part was choosing where to activate. For reasons of proximity, height, geographic isolation and exoticness Bonghwangsan on Dolsan Island was selected with an elevation of 460m. Dolsan Island is famous for 갓김치, mustard greens kimchi, and on our way to the trail head, saw many new plants in the fields.

The trail head we selected starts from Jukpo village, and was actually fairly easy to find (with the right map!) looking for the big 느티나무 in the middle of the village as a start point, in fact could be seen from the other end of the valley. This could evidence their large size, or lack of trees elsewhere on the valley floor…

From the start of the trail, the climb is relatively steep–mostly during the first 2/3 of the hike, afterwards it levels off along the summit line. We were loaded down with extra gear today, for HF, VHF, cooking lunch and antenna analyzer to check out a new antenna configuration I tried out the night before with QBE. So the people were leap-frogging us a bit, and there were people, brought out by the good spring weather and busses, as many of them were in clubs traversing the island lengthwise down to Geumosan…not many going in the opposite direction, in fact!

So, after about an hour of walking and a few pauses at the spring and other spots, we reached the summit. This summit didn’t have a traditional stone marker as can be noticed below, but a newer sign plus a steel marker (though that was slightly lower than the actual summit, but still within the AZ).

It seems as if we weren’t the only ones looking for the top (as mentioned, up higher it wasn’t so steep) as during the activation many people would be wandering back and forth looking around for the highest point or more specifically, something to signify it. All around this area, further south, the coming of spring is showing with trees budding and even cherry blossoms (won’t be seeing that in Iksan for a couple more weeks, at least!).

Up on top it was hard to choose a relatively tree-free spot (to allow for some Yagi swing-age) but since I intended on doing mostly HF we would deal. Initially we were shooting for 20m, and for this I tried a new setup that I had had rocket results with the night before: using the two first segments of the buddistick plus the seven-segment military whip together with NO coil. The counterpoise goes about half out, though I haven’t measured the exact length yet. According to the analyzer it gives me less than 2:1 SWR and the FT-857 just loves it. No tuner. No nothing. Likewise, when I fired it up the night before, who did I hear 59+ in my ear? ZL2JBR, who couldn’t find any faults in my signal. SOLD.

The show was on for 20m, but I could only hear three stations, none of which could hear me. So, I quick altered the antenna config for 40m, and who do I hear? DS1DAT & DS1SED/4 tongue wagging with DAT at 58 and SED at 59++. What skip? Well, DAT couldn’t eek out what I was saying, only that someone was there, though SED gave me a 59. (Evidently SED was a 53 for DAT). So, that was a fun way to start the day! Moving onwards, I started to work the usual Japanese stations, first JP6SRV/p6 then 8J3KTR/p3. That 8J3 station is actually a special event station celebrating 20 years the Kitakinki-Tango Railway, Miyazu Line. Afterwards, we set up the 2m Yagi, making the fourth (and fifth) contacts with 6K5BZS in Jinju. 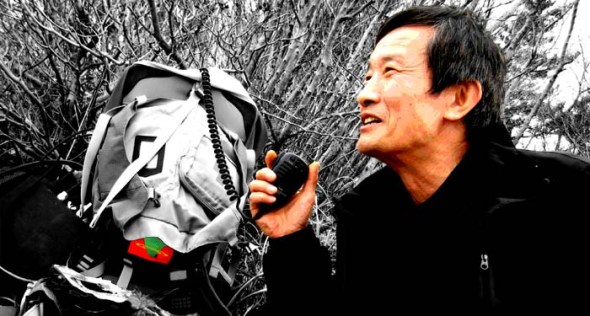 Now, before this weekend, I was not aware GQZ was a new licensee, let alone hadn’t had a chance to have a transmission before. So, the fifth QSO of the day (with 6K5BZS) was GQZ’s lucky first ever contact (above)! Congratulations–it’s all downhill from here, literally! That was more than enough excitement for him for the day so he pawned the mike back off on me, where I reversed the Yagi and made my first Jeju Island full contact with DS4WHQ outside of Jeju City.

To finish up I continued to piddle around on 20m without too much success, and once it started cooling off and getting time to go, of course the band started to open up more though I still had a tough time getting a word in edgewise, especially with this one strong 57 signal from Germany, DL5RBW who was chatting up the Aussies before breakfast. We listened through four different QSOs (with VK & one in ZL) trying to break in, but with no success. Next time!

So, we packed up, headed down back to the car and drove back into the city to call it a day. I would’ve liked to have seen more but things were a bit hazy with the 황사…