For my first ever activation in Busan, and final activation for the long weekend, I chose to pick my fight with 금정산 HL/BS-001, the highest summit in the Busan metropolitan area. Activating this summit, Godangbong, pushed me over the 200-point mark–and it’s surprising how much more quickly that second batch of one hundred points seemed to pass by than the first one (though the time frame is roughly the same)!

고당봉 is located at the northern end of Geumjeong fortress, and I chose to access it via Beomeosa temple, first taxiing it up to the temple then catching the path there for the remaining 3 or so kilometers to the top, passing through the north gate, aptly named 北門. Skipping the bottom leg of the trail was partly because of time constraints as well as to not use all my energy before the next day’s (Sunday) ARDF event also being held at the fortress. I now know that this was a good move since down below it was much hotter, even as far up as the temple, but once I was about 200m higher than the temple the temperature was much more tolerable and fresher.

For the walk itself, I wasn’t sure what to expect, as the particular reviewer who had covered this part of the “Busan experience” in the Lonely Planet Korea took, let’s say, a negative stance, basically dissing anything and everything about the mountain and surrounding fortress. While from my only previous experience of Busan I can’t say I gave the best evaluation of the city either, however when wandering around this area (for two days, at that! Including the ARDF on Sunday) I have to say that I liked the fortress, and found the facilities to be perfectly adequate. I was duly impressed by the city’s efforts at renovation, plus the “solar trail markers,” but I’m still trying to figure out why, exactly, they were solar (I wasn’t around late enough to see if they lit up or anything)… Maybe the person was expecting a cable car to the top, a kiddie train, and a changing of the guards enactment to videotape with a shaky hand never to watch again as grading criteria.

This was planned to be a VHF-only outing for a couple of reasons, one with the intention of a S2S contact with DS2NED on HL/CN-004 O-seosan, and also to make some local contacts in the area. Additionally, since it was a Saturday afternoon, chances were good that somebody else out and about on a mountain somewhere would have an HT turned on.

Upon arrival at the peak and photo shoot I set up the 2 segment mobile whip I was to use and set about scanning the dial, firstly looking for DS2NED. While scanning the lower segment of the 2m band (in SSB) I came across a signal, which was actually HL5BSS having a QSO in AM with someone else who I couldn’t hear–I tried to make contact but wasn’t too successful. Though that was an interesting experience. Moving back up again in FM, I came across NED‘s voice, and sure enough it was him, coming in 58 from the top of Oseosan. I got in line and had a quick contact with him before he took a break to have a bite to eat, said he could pick me up at about 57 over there. Not too bad, as it’s almost opposite ends of the country! 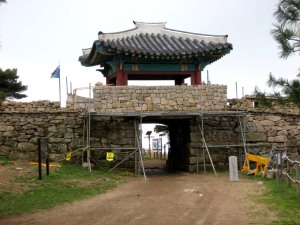 Over the next couple of hours I had a steady stream of contacts all around, west to Gimhae and Changwon, north over Ulsan and Gyeongju all the way up to Pohang and towards Daegu, not to mention down town with a bunch of locals. I also had some QSO’s with a bunch of OPs who I’d see on Sunday at the ARDF race, including a few who were out setting up the course around the fortress for the event in advance. I would’ve kept going but was already late for the planned dinner arrangements so had to cut things off at 6 o’clock (and the battery wasn’t near dead yet!) and head down the hill back into town…

Upon approach to the north gate in scaffolding, it was plain to see people were hard at work here. There was a caterpillar moving rocks up and down the wall to the east of the gate. On the other side (the inside) was the indication (on the right) indicating the phases of renovation that the fortress is undergoing (will undergo) until 2026 (that’s a ways away!). There was also a stone shop where they were cutting and chipping new stones for the fortress walls. It seemed as if they were using a rock saw for the basic shapes then chipping them down to size in addition to giving the blocks a more rustico appearance.

While at this workshop I got to see the “forest fire horse,” a man (ranger?) riding the trails on the horse sporting a “산불조심” emblazoned banner over its mane.

Taken from another sign whose image I couldn’t get to come out in the photo:

Its tip composed of a huge granite mass, this peak of Godang-bong was named after Gomo, a goddess of heaven, who according to a legend based on Taoism, came down here to become the goddess of the mountain (there is still a praying place called Gomodang near the very top). This is the highest of about ten peaks on Mt. Geumjeong with a huge dragonhead-shaped stone called Yongduam at its breast part and a shallow well called Godangsaem at its southern waist part. At its eastern waist part lies a spring called Geumsaem or Geumjeong [金井] (which literally means ‘a golden spring’). A legend says that a golden fish came down from the world of Brahma [梵天:Beomcheon] in a five-colored cloud and lived in the ‘golden spring.’ The names of the mountain (Geumjeonsan) and the temple (Beomeosa) originated from this legend.