At least I can say the weekend wasn’t a “total wash” with the nasty weather and whatnot. Late Sunday afternoon I finally got out, albeit by myself (I had two group activations planned for the weekend) over to HL/JB-104 Godeoksan, as opposed to the intended CB-002 Minjujisan.

I was hoping to meet HL4GKR on this particular outing since this mountain is practically in his back yard, but he was busy with some other engagements. Additionally, I had a quick chat with Peter DK4YO just before going out the door, he said he was going up Haksan, which I believe is one of the smaller peaks (about 200m) located to the west of the peak where I was to activate, but technically part of the same mountain (it descends down in a nice crescent shape, opening to the south).

So I took a less beaten trail from the south-eastern edge of the crescent where 화원 village is located, passing the ruins of Gyeongboksa temple. It’s a steady, but not too hard climb that leads directly to the summit in about 2km, from the same trail head is another trail which tags 1.1km extra plus some more ups and downs, though is perhaps more interesting. That’d be better for a clearer day–as even though the storms had all blown through and there was a strong breeze the whole day, the air was extremely hazy and I had difficulty even seeing across the valley to HL/JB-048 모악산.

On the way up there were still a few late blooming azaleas but for the most part the leaves were coming out on those as well as other plants. Passing by numerous orchards along the way saw fruit trees blossoming, which for me is more interesting than the ever so popular decorative cherry trees with fruit fit only for the birds.

Once at the top I tried calling DK4YO but did get any answers (he brought an HT on his hike). Instead, I heard back from HL4GKR at his home QTH. After chatting a bit he later clued me in to 9A1HDE, Sam working from a Croatian club station coming in 59 on 15m. The primary goal of this weekend was to work some DX SOTA on HF but honestly the band conditions sucked a bit–20m & 17m pretty dead, and 40m full of a Japanese contest. I hadn’t thought of 15m until GKR mentioned it, and after 15 minutes of patience I logged a contact with 9A1HDE, who was busy getting JA’s and ZL’s from his yagi (and G’s and EA’s off the back of it).

Afterwards spotting myself and calling CQ on 15m didn’t bring anything so I switched back over to 2m to wrap up the activation before it was /completely/ dark. I did hear DS1SED/4 a moment but I was calling to another station on the other rig so couldn’t get back to him…when I did he was gone. Then, I made some contacts first up to Daejeon, then Iksan, then Boryeong and lastly Iksan again.

Having finished packing up at 8pm, I went down the dark trail accompanied by an owl somewhere else on the hillside to arrive at the car in just under an hour–pretty quick time. 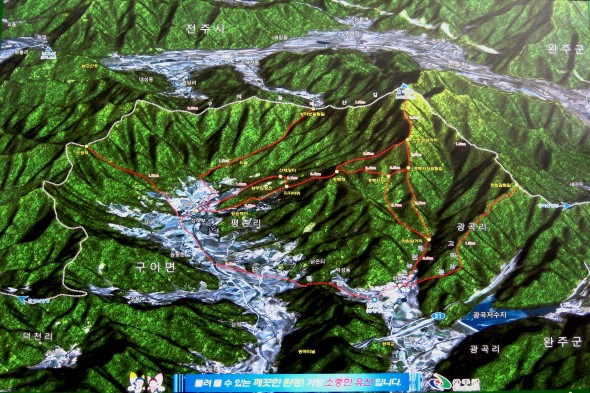